Anna and Matt fell in love with Elba island few years ago and decided to marry there along the shore of this amazing island in Tuscany. When they decided to marry and to contact me something happened: Anna discovered she was going to have a baby so wedding was put apart. One year and half later she wrote me again saying that this time they were ready to marry in the island. I proposed few locations but as becase they wanted to have an informal, fun and romantic wedding their choice was only one, il Faro, in Bagnaia!

At first they wanted to civilly marry in Portoferraio but then all the burocracy stopped them and decided to have a symbolic wedding on the beach.

After the ceremony, there was an antipasto and primi piatti followed by a boat trip. the bride and the groom gifted the guests with a boat tour. After that, around 7,30pm the second round of the party, a BBQ and then after the wedding cake cut, dance,dance,dance.

An amazing days full of laughs, romanticism, tears, it wa sgood to listen to comments…”The best wedding I have never been” ….was one just comment

Beach weddings in Elba island can be organized in different places such as hotels, restaurants etc. for all budgets

For you 2016 beach wedding you can write to wtuscanyeeventsinitaly@gmail.com 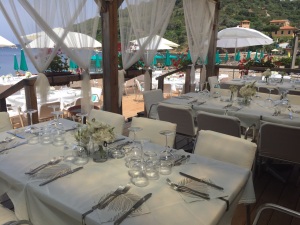 Special Thanks: Laura Emanuelli for all her help

Rossella Celebrini di Minervarte   for the arch and for the Dj. A support in Elba island

January Brazilian elopment : a letter from the groom 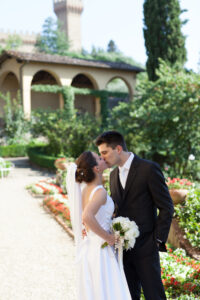